Ceejay, understanding what you are saying, I still have to interject that there is no such thing as an emotional void. You obviously feel loss, or perhaps even pain, but this is anything but a void. You are complete. You needed nothing 'to complete you,' for you will be yourself, happy or not. You are not missing something or someone; though, you may desire the experiences available in knowing someone else. But, you need to define what that experience is, and why you want it. I am not trying to belittle your perceived need. I am only suggesting that you might want to clarify your desire. There is not map that can get you to a destination unless you know what that destination is. In fact, you cannot get to a destination, even if you have a map and know the destination, unless you know where you are presently. Both points are required. If you know more about yourself, pleasing or not, after your relationship than before, you have gained, not lost. You have increased your chances of obtaining what you are after. Just be sure of what that is. Just as fame is not success, praise is not personal value, education is not knowledge, or even knowledge the same thing as wisdom; romance, attachment, fondness, appreciation are not love. As far as independence, it is an increasing, not a decreasing factor in your life. Without the care of your mother as an infant you would have died. Without your ex-boyfriend you still live. The amount of emotional dependence you possess is up to you. I suggest none. The best relationships, as you have pointed out, have no dependence. It is just the sharing of time because both people feel bettered by that.

alone42 is new to Captain Cynic and has less than 15 posts. New members have certain restrictions and must fill in CAPTCHAs to use various parts of the site.

^ That's why I've decided to live alone and not engage in "romantic relationships."

A CTL of 1 means that littlejohn is a contributing member of Captain Cynic.

Hey, dont go around deciding things. AND if you are like less than 40 years old, dont even try to think you know what is going on. Dont be slamming doors on yourself. Dont waste a single moment thinking about shit, just do it !!

Agreeing with LittleJohn with one exception. Even if you are over 40 years old, still don't "don't even try to think you know what is ."

Little John your a shit person and I don't like you and from now on when your in a post I am going to say so every time you just attack people and tell them NOT TO THINK which is the ANTITHESIS OF THIS SITE you baffle me Maybe a boyfriend fills your void, this an allusion to the concept of penis envy and the base theory of psycho analysis I think the Dali Lama sheds some light on this â€œMan. Because he sacrifices his health in order to make money. Then he sacrifices money to recuperate his health. And then he is so anxious about the future that he does not enjoy the present; the result being that he does not live in the present or the future; he lives as if he is never going to die, and then dies having never really lived.â€ This is why not thinking is a problem you create a void, what people really need to do is connect with emotions by learning how to process them properly so they can gain some perspective on the void and the pangs of panic when thinking of a hollow life that leads people to religiously work out, bounce from relationship to relationship, buy that car, redecorate all distractions so you don't have to confront what's really missing. A lot of divorces happen because people get married too young before they know who they are and once they know themselves and each other it winds up either as a clusterfuck that lasts 4 to 10 years or less, or it stays a dance of duty of avoidance for years. The problem is that people do JUST LIKE GENIUS LITTLE JOHN DOES and just not think about things and expect it to pan out like some fucking steve jobs fantasy world "Your time is limited, so don't waste it living someone else's life. Don't be trapped by dogma - which is living with the results of other people's thinking. Don't let the noise of other's opinions drown out your own inner voice. And most important, have the courage to follow your heart and intuition. They somehow already know what you truly want to become. Everything else is secondary." Steve Jobs . That's why you see pornos like backroom casting couch with the girl who calls going from an associates degree to a bachelors degree grad school that she is now sucking the dick of some guy who is pretending to be a casting agent for adult models but he's scamming her because he knows all she wants is the money so she can chase her dreams of going from a "marketing degree" to owning her own fashion business, sure it pans out for some people but most are just left to pick up the pieces when they look up the porno she's starring in that she's not getting paid for on an anonymous site known as backroom casting couch or pornhub or you porn and she has to confront hey hollowness and how pathetic she is and looks like she is going to have to deal with humiliation as well because some guy she knows at her college back in Idaho is probably what brought it to her attention or everyone on campuses attention and she either has a psychotic break and ends up in a hospital, kills herself, or embracesses her new identity as whore and then tries to chase the pipedream of being a pornstar and end up broke and alone or she uses it to jump from mate to mate possibly in a drunken or drug filled stupor but I'm just spit balling here on a case study example *WARNING EXPLICIT CONTENT AND PORNOGRAPHIC MATERIAL* http://www.pornhub.com/view_video.php?viewkey=874437644 This is a cautionary tale against not thinking and analyzing what goes on in your life, because midlife crises are just sad on a Massive level By that I mean the small minority of people that get those dreams without understanding themselves our there limits are in the extreme minority, the rest are picking up the pieces by totally gambling on the outside chance of fulfilling there dream the person who knows there limits has none Your right though, having a masculine or feminine influence in your life that inspires you and shows you a different view from the opposite sex's zeal for life as well as the light they shine on your on perspectives and opinions is great but you can create this illusion very easily I used to do it when I was 19 - 21 years old, then I found myself being a hollow person. On insanity Einstein's idea is purely satirical commentary which is more suited to stupidity as in not thinking about things and repeating the same scenarios. Sanity is a bell curve and is totally subjective, to me society is insane not thinking is insane and Littlejohn is insane to society stupid people and little john I am insane The Thing That's Holding You Back - a book on controlling seeing emotions snap out of the fantasy world littlejohn keep bullying people, telling them not to think and not even attempt to make a point I will bully you right back 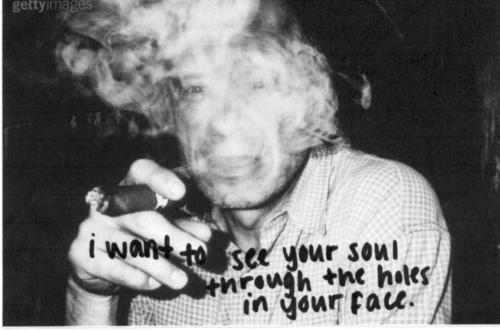 Little John your a shit person

-- you have to stop this type of post. If you don't you will probably be bared from this site. Besides, it is not true. LittleJohn is a decent person from all I can tell. He just disagrees with you. Attacking the person, and not the argument is an ad hominem fallacy which renders the argument void. Play nice.

Ok I am sorry to you dawn and other people on this site, I will stop